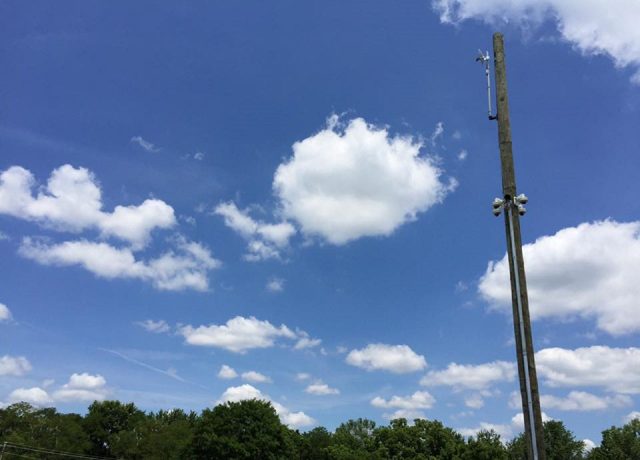 The system consists of four high resolution cameras that provide a 360-degree view of the park. According to Department of Public Safety administrative officer Dean Marcum, the system records footage 24/7. He also said the cameras are monitored periodically. The department retains data for 30 days.

“If there is something we need to keep we copy it to a DVD.  If it is evidence of a crime it is turned over to police,” Marcum said in an email.

He said the cameras were installed as a standalone pilot program to study their effectiveness in deterring crime. The city chose the Berry Hill because of its relatively small size and due to some criminal issues in the area.

“Berry Hill has garnered some attention related to graffiti and vandalism, so in an effort to make it more family friendly, Council decided Berry Hill is a good pilot project site,” Marcum wrote.

The estimated cost submitted to the Urban County Council for the system was $30,000, including installation. The actual cost of the project remains unclear.

Marcum made a presentation to the General Government and Social Services Committee during the Nov. 1 meeting. It sheds a little bit more light on the project.

Marcum submitted a photo that showed the reach of the camera system. It includes the skateboard area itself, along with parts of the park’s walking trail. It also appears to include several private homes on the perimeter, as well as part of the neighboring shopping center. If the estimate camera view was accurate, their reach onto private property creates significant privacy concerns.

Marcum emphasized the importance of “community buy-in” before installing the surveillance cameras in the park.

“A big thing in my opinion is having neighborhood meetings and getting community buy-in. That’s critical in my view. We want the community on board with these. I think that’s a big part of it.”

In fact, there was no notice given to the community. There were no community meetings. The cameras just appeared one day. One resident who uses the park regularly said workers installing the pole told him it was for lights.

Fred Brown said it was difficult to notify residents of the Berry Hill neighborhood due to the nature of the area. Nevertheless, he seemed confident that wouldn’t pose a problem.

“When you talk about community disapproval, I haven’t had any feedback. The problem is – is there’s not a real strong neighborhood association out there, so I wasn’t able to get a group together as such. It also borders 7th District, I believe, and we haven’t gotten any negative. We’re hoping as this gets out into the community that it will have a positive effect.”

Scutchfield echoed Brown’s talking-point, saying it was difficult to get information to the community because of its makeup.

“There’s a lot of rental property. There’s not a lot of homeowner-owned property, and so it’s really hard to get that neighborhood buy-in.”

It remains unclear why Scutchfield thinks renters don’t care about what happens in their neighborhoods.

Despite Brown’s contention that he saw no indication of any opposition, some in the community were not pleased when they discovered surveillance cameras in their neighborhood.

“I believe that there are more effective and fiscally responsible methods of preventing crime and vandalism in our communities without intruding upon the privacy rights of Lexington citizens,” Clay Davis said. “Furthermore, our right to privacy supersedes the government’s desire to spy on us.”

Patricia Taylor lives in a neighboring county, but also expressed deep concern about the prospect of surveillance in Lexington parks.

“I have a vested interest in surveillance still, because of how often I am there. I thought about how I have brought my son to parks in Lexington before. I don’t want surveillance video of him to end up God only knows where, with God only knows who,” she said. “And the scary thing is that they are voting to do surveillance on me and my family, and I never voted for a single one of those people! They don’t represent us! That is the worst part of the surveillance state.”

A number of council members expressed concerns about the cost of the project and questioned using Berry Hill as the pilot park, but Evans voiced the only principled opposition.

“I just inherently have issues when it comes to surveillance,” she said. 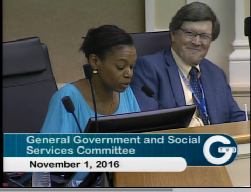 Contrary to Brown’s contention that the plan presented no disadvantages, Evans said she saw a number of problems with surveillance, specifically mentioning the possibility of constitutional issues. Brown visibly rolled his eyes as Evans spoke.

Bledsoe expressed some reservations, but voted for the plan both in committee and in the full council. She apparently didn’t want to go against Brown’s pet project.

“I’d prefer, for some of the reasons councilmember Evans suggested on the privacy, not to go this direction. However, I’m not going to fight you on that. I know this is very important to you Councilmember Brown.”

Brown ultimately made a motion to vote on moving the pilot program to the full council despite the fact several other members still wanted to speak or ask questions. He also took a dig at Evans before making the motion.

“I think we need to go forward with this. As Councilmember Evans, which she strongly opposes it, I would just say, you know, at least I’m coming up with some type of ideal (sic) for public safety and to protect the citizens out there, and if you’ve got a better ideal (sic) or any kind of ideal (sic) that you – then you need to bring it forward  into committee.”

The cameras in Berry Hill Skate Park raise broader issues. It remains unclear what other types of surveillance technology government agencies in Lexington own and operate. This could merely be the tip of the iceberg. In fact, Henson mentioned in passing she believes that the Lexington Police Department uses monitoring cameras that they move around.

Surveillance technology has its place and can assist in law enforcement. But its invasive nature and the significant privacy concerns it raises, necessitates strict transparency, oversight and control. Government agencies should develop detailed use policies open to public inspection. Council should approve these polices after a public hearing before any agency can acquire and utilize surveillance equipment. Policies should include strict limits on data storage and sharing, and should address all privacy concerns.

Lexington appears to have no such procedures in place. This needs to change. Perhaps the Berry Hill cameras can serve as a catalyst to bring about proper oversight and transparency of surveillance technology used by police and other government agencies.